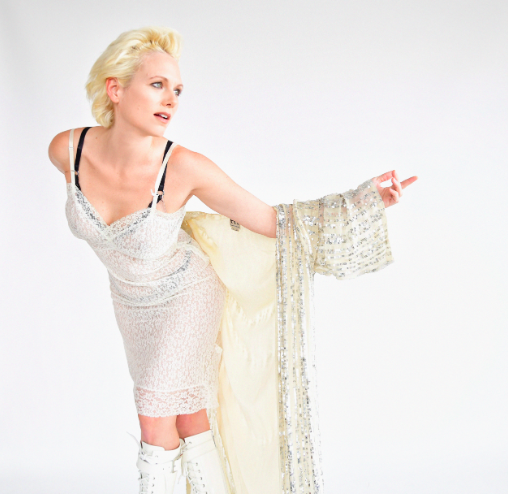 IVA: Becoming a Musical Symbol of Hope and Healing

“Even if you think it’s your darkest hour, there is hope, and there is light.” -IVA

Operatic singer-songwriter, a genuinely fierce humanitarian, and mentor are a few words that can be used to describe the worldly, vocal talent known as IVA.  She possesses the uncanny ability to move seamlessly from a pop-style vocal into full operatic singing, often within the same song. Her phenomenal talent has afforded her international recognition. IVA is universally applauded as that rare crossover artist, pop and opera singer, songwriter, bandleader, composer, and mentor – with an extraordinary career of sixteen years. As a pioneer in the male-dominated music industry, IVA is a symbol of women’s empowerment, inspiring and guiding many promising young female artists.

Coming from a deep-rooted, musical background, IVA was inspired by her grandfather at an early age to pursue music. Evelyn Swenson, a family friend, and well-known composer and conductor at OperaDelaware took the aspiring artist under her tutelage and gave her an onstage opportunity at only 9 years old. In later years, she would later go on study music at the Juilliard School and Manhattan School of Music. She even graduated from Princeton University’s world-class performance program with a music prize. Iva was later granted a Fullbright Scholarship to study her ancestors’ music in Sweden which would be a significant moment in her career. Iva explains, “I was able to live in a completely new culture and that opened up my mind and my creativity. I had a lot more free time during the Fulbright and I would go for long walks and visit with other artists. Those unscripted days gave me a chance to hear the creative voice inside of me.”

A pivotal moment in IVA’s career was when she made her first appearance on Late Night with Conan O’Brien. Her talent was undeniable with O’Brian himself stating, “She can sing so high that her voice actually goes outside the range of human hearing.” From here she received several opportunities to perform as an actress and singer making her an international talent. Some of her career highs include her international tours, releasing multiple hit albums, “Ivolution” in 2009 which was picked up by Universal Sweden, “Leap” in 2015, and more recently “Traitor,” released in 2019. Iva has also collaborated with Grammy-award-winning producers and highly acclaimed artists,  Tim Sonnefeld, Jaron Olevsky, and Trey Pollard.

Perhaps one of her best moments includes when she made history as the youngest person to receive the Vasa Order’s Swedish American of the Year Award for her unparalleled career and involvement in U.S-Swedish cultural relations. This acknowledgment came at the perfect time for IVA who was then battling a crisis of confidence.  When recalling this moment IVA says, “I was dumbfounded, and I truly needed that lift.” She states that upon arrival she was met with celebrations at the airport and enjoyed many beautiful days of events where she was treated with great respect. “I felt that I had been given a gift from the Universe to remind me who I was and that what I was doing was valuable to others. And I made lifelong friends with some members of the Vasa Order who now visit us in the States.”

When talking about her creative process, IVA uses psychology and self-awareness.  Many of her songs come from an “aha” moment of realizing what she’s actually doing in her life and how she relates to her subconscious. She also finds inspiration from her relationships and friends who fascinate her with their stories. That is how the single ”Run” came about. This is also how her critically acclaimed single “Immense Tenderness” was born. As her career was flourishing, her personal life was withering as IVA would become a victim of domestic violence that lasted for many years. The response she would receive for sharing her song would inspire her to compose an operatic piece from “Immense Tenderness,” which will be her first libretto.

When asked about her progress, IVA stated,

“We just had the first reading of the libretto, the words of the opera, and it sparked a rich discussion about the nature of abuse and having to go into the unknown in order to leave a bad situation. We had discussions with the donors for the opera and many ideas crystallized for me about how to develop the story and the characters.”

She is also able to expand her writing skills, noting, “I’ve never written a libretto before and it’s quite different than writing lyrics. So I’m working on my process for that and may bring in a libretto to help me. In the meantime, I’m going to start writing the music!” Overall she is thrilled with the projections and her team.

Throughout her career, Iva has had many notable talents pour into her career including W. Stephen Smith, Kishti Tomita, and Don Marrazzo, who apprenticed with Celine Dion’s vocal teacher William Riley. She plans to pay it forward through her lyrics and actions stating, “I hope that my music touches many people and uplifts them. I also work with many students who I hope will love making music for the rest of their lives and pass that on to their families. I hope to make music training possible for more people both now and after I am gone.”

This year IVA plans to share more of her musical talents with the world. She states, “I hope to release “Run” to the radio while we release the video for it, directed by Camille NaRa. I also have a follow-up EP called “Nobody’s Woman” that will come afterward. I’m also planning a tour.”

To hear more of IVA visit www.ivavoice.com and join her mailing list to stay updated on upcoming events!

Be sure to keep up with IVA @ivavoice on all social platforms.

ABOUT THE RECAP REPORT

The Recap Report is an American news publication covering world news, trending celebrities, luxe lifestyle, business and the latest in sports and entertainment.